If these quarters of poverty are on one hand hotbeds of crime, on the other hand they are as well fertile fields of cultural productions. Not only samba, carnaval, and soccer are obtaining their unbowed power from the favela, but also hip-hop, funk and other music styles. Theatre, dance, and fine arts are experimenting there. The legendary film 'City of God' was not the first one to create a proper favela-genre.
For politicians, economists and sociologists the favela may be a nightmare, but for artists it is a treasure chest. It is a glance into the abyss, but also a room for wildest imaginativeness. 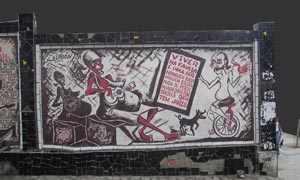 By the turn of the millennium, violence and brutalisation in the megacities was an omnipresent issue. The favela became the scenario per se: 'favela-fiction' was followed by 'Telenovela-Favela' and sound waves of baile-funk-nights crushing Rio. The media made the favela a worldwide export hit that thrusts upon us.
Over a hundred years, Brazil has been availing itself of the favela and its cultural activities in producing images, sounds, and lifestyle.

In all forms of expression the artists are following a uniform string of topics:

Astonishing is the dense network in which various ways of communication are enmeshed. A favelado becomes artist-becomes-dancer-becomes-writer-becomes-musician-becomes ... the network lives, feeds, and fertilises itself again and again. The Brazilian way to look at the subject is always in an easy, humorous, and ironic manner. Those who would complain should have a cacha¡a first. Certainly this way of criticising [what?] is a main attractor for the audience. The denunciation comes through the back door. Brazil has long understood that the fight 'colonised versus colonizer' (black against white) has ended. Now it is only about changing the reality.

Exactly. The rage of the favela will be a cultural one. Nowadays the daughters of the middle class are listening to the funk sound of the morro. The daughter of a friend of mine is going out with a favelado, who she met at a funk party. At the same time parabolic antennas are serving the favelas with MTV and NBA games. An identification with the North American blacks came out for those who are denied to find a place in our society.

Diffusion of information in Rocinha, the biggest favela in Rio de Janeiro: