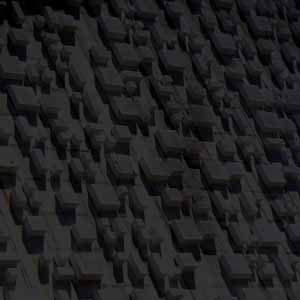 The fixed idea of getting work and welfare in the city makes urbanisations grow faster than ever. Around the turn of the century in 1900, half of the world's population was urban. More than three quarters of the billion 'poor people' are living in urban settings, in scanty cottages without any infrastructure.

Every day 180.000 people arrive in a city to begin a new life. This means that every 8 weeks a 'new' city of over 10 million habitants would pop up.

In 1950, the world knew only one city with over 10 million habitants: New York. By 2000, we could already count 19 megacities; only three of them in industrial states: Tokyo, New York and Los Angeles. The global network of cities feeds globalisation regardless of period: slave-trade, consumption, knowledge centres ...

Only if Internet access and satellite mobile phones were equally present on earth, it would show if we (and I mean every living person on earth) could connect each other independently from our locality. No one can tell what influence these inventions would have on urbanisation. Maybe a step toward ruralisation?
Megacities are mainly caused by a high birth rate, rural exodus, and industrialisation. In developing countries the cities cannot provide opportunities to fulfil basic needs.

Arkadien
1 is a region of Greece in the Peloponnesus.
2 a rural idyll in a fantasy realm, another world, or an alternate dimension Due to its remote, mountainous character, Arcadia has always been a classical refuge. The inhabitants of this region bear an obvious connection to the figure of the Noble savage, both being regarded as living close to nature, uncorrupted by civilization, and so virtuous.
www.wikipedia.org